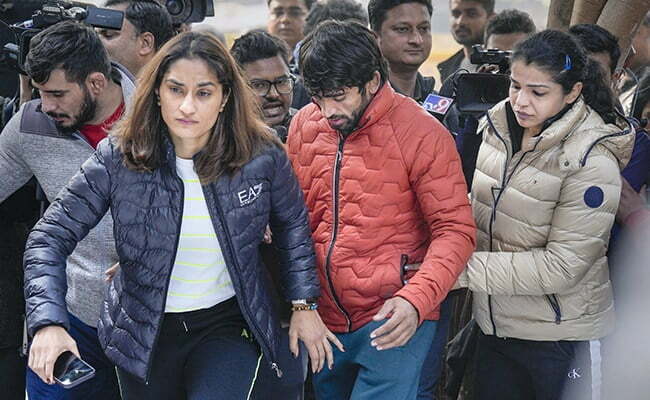 Apart from the players, many political personalities are also giving their support to the wrestlers. Congress General Secretary Priyanka Gandhi also justified the demand of the wrestlers. He said, “Our players are the pride of the country. They increase the country’s reputation by their performance at the world level. The players have made serious allegations of exploitation against the Wrestling Federation and its president. The voices of these players should be heard. Investigation of the allegations Appropriate action should be taken.”

Our players are the pride of the country. They bring laurels to the country by their performance at the world level. The players have made serious allegations of exploitation against the Wrestling Federation and its president. The voices of these players should be heard.

Allegations should be investigated and appropriate action taken.

So far, about 200 wrestlers have reached Jantar Mantar, and the process of arrival of wrestlers is going on.

Wrestlers allege that the president and coach of the Wrestling Federation of India sexually harass women wrestlers. Some coaches have been sexually harassing for years. However, Braj Bhushan Sharan Singh, president of the wrestling association, has denied these allegations.

Wrestler Babita Phogat tweeted, “I stand with all my fellow players in this matter of wrestling. I assure all of you that I will work to raise this issue with the government at all levels and in accordance with the sentiments of the players.” The future will be decided.”

I stand with all my fellow players in this matter of wrestling. I assure all of you that I will work to raise this issue with the government at every level and the future will be decided according to the feelings of the players.

On one side the wrestlers are sitting on a dharna at Jantar Mantar, while on the other hand the security has been tightened outside the house of Braj Bhushan Sharan Singh, president of the wrestling association. Braj Bhushan Singh is not in Delhi, but his supporters are continuously reaching his house.

Braj Bhushan Singh has been associated with controversies
Braj Bhushan Singh is currently MP from Kaiserganj Lok Sabha seat of Bahraich and son Prateek Bhushan is MLA from Gonda. Braj Bhushan Singh is the President of the Wrestling Association continuously since 2011. Last year, he was in headlines for his rhetoric against his own government. He had said that “the tongue is closed, if you speak, you will be called a rebel.” Brajbhushan Singh had slapped a wrestler on a packed stage in Ranchi two years ago. He opposed the visit of MNS chief Raj Thackeray to Ayodhya, apart from the Uttar Pradesh government.

What is the whole matter?
In fact, athlete Vinesh Phogat, who represented India in the Olympics, has alleged that national coaches have molested and sexually assaulted women wrestlers for years.

Vinesh made a flurry of allegations
Vinesh said, “We were threatened that our career would end if we spoke up. Federation members used abuses against women wrestlers. We have also approached the Prime Minister, some coaches close to national federations, Those coaches have exploited young girls and don’t know how many young girls have suffered because of them.”

Olympic bronze medalist wrestler Bajrang Punia said, “We will not participate in any international competition until the WFI president is removed.”

Federation gave this answer
After Vinesh Phogat’s serious allegations, Wrestling Federation of India President Brij Bhushan Sharan Singh said, “Is there anyone on record who can say that the Federation manipulated us? If you had such issues with the Federation, Why didn’t anyone raise them for 10 years? Whenever rules are made, issues come to the fore.”

WFI chief Brij Bhushan said, “There is no truth in the allegations of wrestlers against me, even if a sexual harassment case is proved, I am ready to go to the gallows, I will not quit the post of WFI president, but I will go to the CBI.” Or ready for police investigation.”

He alleged, “There is an industrialist behind this conspiracy against me. If Vinesh received death threats then why didn’t he approach the police.”

Pooja Hegde decks up in saree for the ‘Mangalore wedding’; fans react