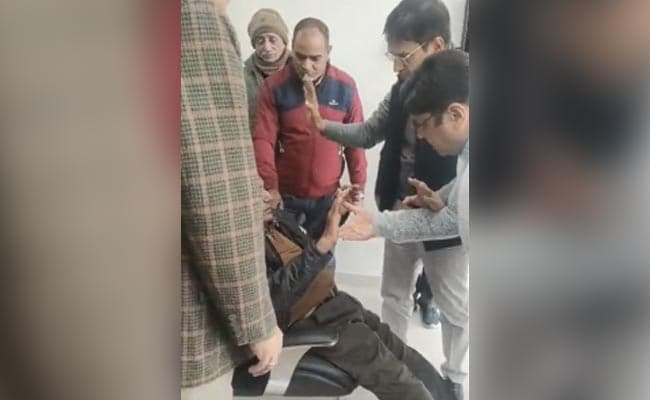 It is being told that the person who fell unconscious had suffered a heart attack.

A video has gone viral in which Chandigarh Health Secretary Yashpal Garg is seen performing cardiopulmonary resuscitation (CPR) on a man who collapsed at the Chandigarh Housing Board (CHB) office on Tuesday. It is being told that the person had suffered a heart attack.

When a man had a heart attack, Chandigarh’s Health Secretary IAS @Garg_Yashpal Ji saved the man’s life by giving CPR immediately. The appreciation of his work is less. Lives can be saved from heart attack. Everyone should learn CPR. pic.twitter.com/C7dWVsAoOI

In the video, which has been widely shared on social media, the man is seen lying on a chair after fainting. Then the health secretary presses his chest to give CPR. The man then regains consciousness and asks for water. Delhi Commission for Women (DCW) chief Swati Maliwal has also shared the video on Twitter appreciating the health secretary.

Whatever came, I did: Yashpal Garg

The person was identified as Janak Lal, who lives in Sector-41 of Chandigarh. After CPR was administered by the health secretary, Lal was taken to the hospital, where his electrocardiography (ECG) was done. He is currently under observation at the Government Multi Specialty Hospital in Sector-16, Chandigarh. According to Yashpal Garg, he was in his room in the CHB office when he was informed that a person had fallen. I went there and gave him CPR. The IAS officer said that he has not taken any training to give CPR and learned the technique through a video on a TV news channel. I know that the procedure adopted by me may not be proper, but whatever came in my mind at that time, I did. Immediate effort to save life was important instead of wasting time on other things.

As soon as the video was shared on social media, it received a lot of reactions from the users. Many praised Garg for acting swiftly and giving CPR to the unconscious man. One user wrote in the comment, “Salute to UT Health Secretary Yashpal Garg IAS, who saved the life of a resident.”

A valuable human life could be saved by the CPR process in CHB. Truly inspirational and learning for many.
Commendable efforts done by Shri Yashpal Garg, Secretary Health, Chandigarh Really appreciable…👏👏👏 pic.twitter.com/DxaUtDsmYm

Another user wrote, “Salute to UT Health Secretary Yashpal Garg, IAS, who saved the life of Janak Kumar, resident of Sector 41-A, Chandigarh, by giving timely CPR.” However, some medical professionals also pointed out that the CPR technique used by the Health Secretary was not correct. “It appears as if the person was unconscious, and appears to be awake when “CPR” is being administered. Second, this is the wrong way to perform CPR.”

When a man had a heart attack, Chandigarh’s Health Secretary IAS @Garg_Yashpal Ji saved the man’s life by giving CPR immediately. The appreciation of his work is less. Lives can be saved from heart attack. Everyone should learn CPR. pic.twitter.com/C7dWVsAoOI

A doctor urged, “Please don’t do it haphazardly, it may break ribs and chest bone. Know the proper reasons and the proper method.” One comment read, “Yes everyone should learn CPR..thankfully the person is safe..but the way it was done is not CPR..it may do more harm than good.”Yashpal Garg visited Lal in the hospital that evening and said that his tests were normal and he would be discharged soon.

PM Modi on Mumbai tour this evening, will speed up the economic capital with other projects including metro

UP: Teenager shot dead for rejecting love proposal in Bhadohi, a student killed in Meerut