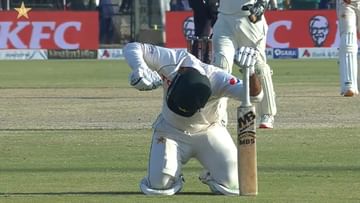 PAK vs NZ 2nd Test: The second Test match between Pakistan and New Zealand ended in a draw. While Pakistan had a target of 319 runs in front of them, they managed to score 304 runs for 9 wickets by the time the game was stopped. Sarfaraz Ahmed scored a century for Pakistan. He scored 118 runs off 176 balls. However, the home team could not get the win. Earlier, Pakistan had a very bad start. Pakistan’s first 2 wickets were lost for zero runs. Opener Abdullah Shafiq was dismissed by Tim Southee for no runs. Meanwhile, Mir Hamza was dismissed by Ish Sodhi for zero runs. At the same time, Imam-ul-Haq was out for 12 runs. Imam-ul-Haq was removed by Ish Sodhi. Agha Salman was dismissed for 30 runs.

Former Pakistan captain Sarfraz Ahmed made a comeback after almost four years in the Test series against New Zealand. He scored centuries and half-centuries in the first two Tests after his return. Sarfaraz has so far scored 3 half-centuries and one century in four innings in these two matches. He scored the fourth century of his Test career in the second innings of the second Test against New Zealand. He completed the century in 135 balls.

Intense innings at a late age..