Big Bash League: In the Big Bash League (BBL), Australian all-rounder Ben Cutting took a catch at the boundary moving faster than Superman. This video is going viral on the net. 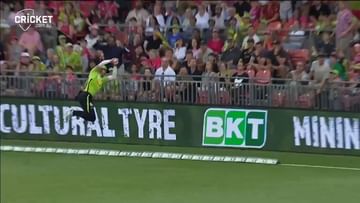 Viral Video: Australian all rounder Ben Cutting is famous for his batting and bowling. He is making noise in the Big Bash League (BBL) with the same momentum. Currently he is playing for Sydney Thunder in BBL. On Sunday, Sydney Thunder took on Sydney Sixers. Cutting shocked everyone with his brilliant fielding in this match. This video is going viral on the net.

Despite such excellent fielding.. Cutting could not win his team. Batting first in this match, Thunder scored 133 runs for the loss of eight wickets. The Sydney Sixers team achieved this target in 16.2 overs by losing three wickets.

The audience was surprised when Cutting took a super catch in this match. All the people sitting in the stand looked shocked from their seats. Along with them, batsmen, bowler and fielders also couldn’t believe this catch. The third over of the Sydney Sixers innings continues. Bowler Brendan Doggett and batsman James Vince are ready. Vince played the second ball which the bowler bowled outside off stump. The ball hits the bat and goes to third man. Cutting was standing there. If the ball is going a bit far and high, he hunts like a super man.

At the crucial moment of cutting, he jumped faster than Superman and made a brilliant catch with both hands open. All the people who saw this catch were speechless.

When it comes to the match..

Batting first, the Sydney Thunder team could not make a big score. Sam Whiteman scored the highest 42 runs in that team. He played an innings of 42 runs off 34 balls. He hit four fours and one six in the innings. Alex Ross scored 34 runs. Cutting scored an unbeaten 26 off 15 balls with five fours. Sean Abbott took three wickets for Sydney Sixers.