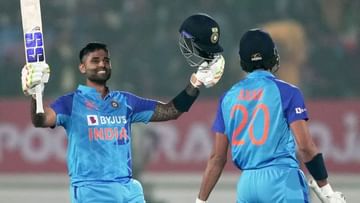 Suryakumar Yadav is currently known as the best T20 batsman. Every time an opportunity came.. he showed his ability and became number 1 in the T20 World Cup. In the deciding match against Sri Lanka on Saturday, Suryakumar played a vital role in India’s series win by scoring a century. Suryakumar became the first Indian batsman to score a century in T20 in 2023. His innings also became the fastest century for India in T20 Internationals. After this innings, a video of Indian team leg-spinner Yuzvendra Chahal kissing Suryakumar’s hand is going viral on the net.

In the third T20 match in Rajkot, Suryakumar remained unbeaten with 112 runs off 51 balls. He completed the century in 45 balls. Suryakumar became the highest run scorer in this series. He scored 170 runs in three matches. During this time his average was 85 and strike rate was 175.25.

After the match, Indian team’s leg-spinner Yuzvendra Chahal showered praise on Suryakumar’s innings. He kissed Surya’s hands. This video of Chahal is currently going viral on social media. Chahal first touched Suryakumar’s hands with both his eyes and then kissed both his hands one by one.

Chahal also bowled well in this match and scored 30 runs in his three overs and took two wickets. Chahal took the wicket of Dhananjay D’Silva who was looking dangerous after scoring 22 runs off 14 balls. Apart from that, Charita Asalanka also showed the way to the pavilion. Asalanka scored 19 runs.

Suryakumar scored three centuries in T20 and achieved this feat within six months. He scored his maiden T20 century against England on 10 July 2022 at Nottingham. Meanwhile, the second century was scored on 20 November 2022 against New Zealand at Mount Maunganui. After that, he scored a century against Sri Lanka. This is his first T20 century for India.