BRS on one side and BJP on the other side..Many fans of the Congress party feel that it is not right that the Telangana Congress is struggling with internal problems while showing aggression in the state. 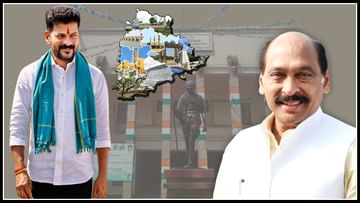 The senior leaders of Telangana Congress, who recently came to the fore as G-9, have achieved what they set out to do. TPCC President Revanth Reddy has finally given up on their long-held insistence to get rid of Manikkam Tagore, the in-charge of Telangana Congress affairs, who says Tana means Tandana. For the last 20 days, there is a campaign that Manikkam Tagore will be removed from the charge of state affairs. In this background, since January 4, Manikkam Tagore thanked the Telangana leaders and left all the WhatsApp groups related to the party. It seems that he has left the affairs of Telangana indirectly. But now, who will be appointed in place of Manikkam Tagore has aroused interest. But AICC announced the in-charge within hours. This is an election year. Telangana assembly elections are going to be held in next 9 months. At such a crucial time, the internal quarrels in the party should be stopped and everyone should come together and face the elections. While BRS on one side and BJP on the other are showing aggression in the state, many fans of the Congress party think that Telangana Congress is struggling with internal problems. He wants the party leadership to take concrete steps to fix the problems.

With the announcement of the committees

On December 10, 2022, the Telangana Pradesh Congress Committee released the AICC lists for filling the jumbo working group, party political affairs committee and some district congress president posts. Until then, the dissatisfaction that was growing like water under the carpet on the behavior of TPCC president Revanth Reddy was exposed with the announcement of these committees. As soon as the announcement of the committees came out on the evening of December 10, people like former minister Konda Surekha directly called Revanth Reddy and expressed their displeasure. But it was published in yesterday’s newspapers that Surekha was satisfied with Revanth Reddy’s answer. Keeping the Surekha issue aside, there have been rumblings in the Telangana Congress since the announcement of the committees. While some leaders expressed their dissatisfaction in internal meetings, some leaders made comments openly. Former Deputy Chief Minister Damodara Rajanarsimha came directly to Gandhi Bhavan and prepared to air his displeasure before the media. But some leaders persuaded him and temporarily backed down. But after that Damodara Rajanarsimha continued to hold internal meetings with his followers and some party leaders at his residence for two or three days. After that he came directly to the media and criticized the appointment of committees and the selection of DCC presidents. Rajanarsimha’s comment was that those who have been working in the party for a long time, but those who have recently joined the party, have been prioritized in the committees and in the selection of DCC presidents. After that, for a day or two, the situation seemed to be improving. But soon after that nine senior Congress leaders had a secret meeting in the name of G-9. CLP leader Mallu Bhatti Vikramarka, former Deputy Chief Minister Damodara Rajanarsimha, former TPCC President Uttamkumar Reddy, Duddilla Sridhar Babu, Jaggareddy, Madhuyashki Goud, Maheshwar Reddy, Geetha Reddy and others participated in this meeting. As many key leaders participated in this meeting, the matter came to the attention of the Congress party leadership. Since then efforts have been started to pacify these senior leaders. Mallikarjuna Kharge, who took over the duties of the AICC president two months ago, handed over the responsibility of fixing the affairs of Telangana to another senior leader, former Madhya Pradesh Chief Minister Digvijay Singh. Digvijaya Singh, who entered the field immediately after handing over the responsibilities, held discussions with Revanth Reddy and Uttam Kumar Reddy in Delhi along with Bhuvanagiri MP Komati Reddy Venkata Reddy who has been staying away from party activities for some time. After knowing the thoughts and opinions of these three people, he came to Hyderabad yesterday and spent two days in Gandhi Bhavan to learn the opinions of many senior leaders. After that, going back to Delhi, he decided that the developments in the party were like a storm in a tea cup and should not be taken seriously. At the same time, he gave a gentle warning to all the party leaders. Diggy Raja warned that no matter what the problems, they should be discussed on the internal platforms of the party and not directly to the media.

After the end of Digvijay Singh’s visit, there was not much reaction in the party. But, the stories that the dissatisfaction has not decreased at all are still coming in the media. In this order, Revanth Reddy organized a key meeting on 4th January and asked all the key leaders of the party to attend it. He proposed to discuss in the meeting regarding the “Hath Se Hath Jodo” march that he had planned to do from January 26. Revanth Reddy’s faction revealed that this meeting is to finalize its padayatra schedule and to finalize the points to be highlighted in the padayatra. AICC President Mallikarjuna Kharge advised the senior leaders to attend this meeting. But the senior leaders did not relax their grip as nothing was done as they demanded. Some of the senior leaders of G-9 were absent from the meeting organized by Revanth Reddy. In the meetings with Digvijaya Singh, some of the senior leaders asked the leadership to remove Revanth Reddy from the post of TPCC president and others to replace the party’s state affairs in-charge Manikkam Tagore. But since Digvijay Singh came and went for 15 days, none of these two was implemented, so the senior leaders decided to use their power. That is why they decided not to go to the meeting organized by Revanth Reddy. But people like CLP leader Bhatti Vikramarka and Kodanda Reddy, who was the chairman of the Disciplinary Committee in the past, attended the meeting with the intention of not going when asked by the national president. Sources of Gandhi Bhavan have leaked to some media houses that there has been a split in the group of G-9 leaders and some of them have come to the meeting conducted by Revanth. The followers of G-9 leaders alleged that this was done strategically by Revanth Reddy’s faction. In total, among these nine key leaders were away from the meeting organized by Revanth. Bhatti Vikramarka is spreading rumors that Revanth Reddy, who decided to start the padayatra from Bhadrachalam in his district, did not tell him about it even nominally. As all the senior leaders were persistent, what they thought was inevitable, but Manikkam Tagore has indirectly announced that he has withdrawn from the affairs of Telangana by leaving the party’s WhatsApp groups.

In the background of Manikkam Tagore being in charge of state affairs, who will come in his place has been a topic of discussion for a few hours in the Congress ranks. The names of many national leaders were discussed. Telangana assembly elections are going to be held in next 9 months. In this context, it is necessary for the state level leadership to prepare the party for elections and give a clear signal to the party ranks at the ground level. At the same time, there is a need for the national leadership to take steps to lead the state leadership under one hand. In view of these two aspects, it is interesting to know who will be entrusted with the responsibilities of Telangana affairs. Ghulam Nabi Azad, Digvijay Singh and Veerappa Moily, who were in charge of the affairs of the joint Andhra Pradesh Congress in the past, were able to draw on their experience and keep the party ranks on the same page. Among these three, Ghulam Nabi Azad is no longer in the Congress party. He has resigned from the Congress party and has been demanding the central government to form a regional party in Kashmir and conduct assembly elections there as soon as possible. Former Karnataka Chief Minister Veerappa Moily is not seen much in active politics. Due to his 82-year-old age, he is seen only occasionally in party functions. Political analysts are of the opinion that such a person may not be given the responsibility of Telangana. Many people thought that Digvijay Singh, who remains the most active and at the same time a leader who has complete understanding of Telangana Congress leaders, will be entrusted with the responsibilities of state affairs. Many believed that Digvijaya Singh had the ability to unite the party ranks before the elections and formulate strategies to face a KCR-like Apara Chanakya. But at the same time as the Telangana Assembly elections, Digvijay Singh’s home state Madhya Pradesh Assembly elections will also be held. Naturally, he has a need to protect his followers and interests in Madhya Pradesh politics. In that case, it seems that Digvijay Singh was not given the responsibility because his opinion was different about taking the responsibilities of Telangana. Apart from that, Digvijay Singh is in charge of Rahul Gandhi’s Bharat Jodo Yatra which is currently going on in the north. So I think he may not show interest in Telangana because it is a big responsibility. Apart from these three, names of leaders like Mukul Wasnik, Prithviraj Singh Chauhan, Vayalar Ravi and Chidambaram were also heard. Among them Vayalar Ravi was previously in charge of joint AP affairs. But now he is 85 years old. So it is claimed that his name has been set aside. Although Chidambaram is a good strategist, it is said that he is not a tough person and is a bit soft. The Congress ranks are saying that a tough person is needed as the in-charge of the party at a crucial time and a soft attitude is not a workout. After that another key leader who got involved in the discussion was Mukul Wasnik. Eventually the Congress leadership, which also sidelined Mukul Wasnik, eventually appointed Manik Rao Thackeray as the in-charge of Telangana affairs. Manik Rao Thackeray from Yavatmal district of Maharashtra served as the President of Maharashtra Pradesh Congress Committee for seven years. He served as MPCC president from 2008 to 2015. He was elected MLA four times and MLC twice. He served as a minister in the Maharashtra Cabinet many times. The 68-year-old Thackeray is from Yavatmal, which is a neighbor of Telangana, so the sources of Gandhi Bhavan say that he is aware of the politics here. It is said that the AICC issued an announcement appointing the in-charge of Telangana affairs within one or two hours due to lack of time. In the wake of the latest developments, there are many challenges facing Thackeray in fixing the affairs of Telangana. All in all, the affairs of the Telangana Congress are going in an interesting direction.