It is alleged that the money coming from the central government will also be stopped. Telangana Sarpanchul Sangam has called for agitation in Dharna Chowk for panchayat raj funds. 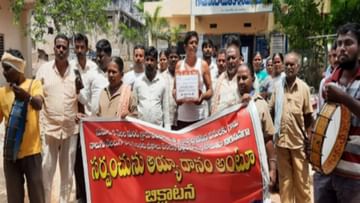 Sarpanchs in Telangana called for dharna for funds. Apart from not allocating funds to Gram Panchayats, the government is also accused of withholding money from the central government. The Telangana Sarpanchs Association has called for agitation in Hyderabad Dharna Chowk for panchayat raj funds. The sarpanchs are furious over the state government’s diversion of funds allocated by the center and finance commission to the panchayats. They expressed their anger that they are being treated unfairly by using the central funds which have come to the panchayats for other schemes.

Special bank accounts have been opened for funds to come from the Centre. The state government froze the accounts of Gram Panchayats (GPs) and expressed their grief that they have not received central funds for eight months. Meanwhile, it has been clarified that central funds have been deposited in two installments in the last week. But they said that the Telangana government has emptied the deposited funds.

If the center gives funds for the electricity bills of GPs and salaries of employees, how will the state use them? According to the rules of the Central and State Governments, the funds of the Finance Committee have to be used for sanitation, drinking water supply, green food and development works. They lamented that the state government has not released SFC funds to them for eight months, due to which they are facing difficulties as they are unable to fill diesel in tractors and pay electricity bills.