The Center on Thursday (January 5) directed the state government to strictly implement the management plan related to Parasnath Wildlife Sanctuary in the wake of massive protests by Jains. Chief Minister Hemant Soren.. 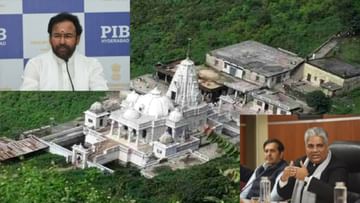 The Center on Thursday (Jan 5) directed the Jharkhand government to strictly implement the management plan related to the Parasnath Wildlife Sanctuary in the wake of massive protests by Jains against the recent notification issued by the Jharkhand government. The Jharkhand government led by Chief Minister Hemant Soren has decided to convert Sri Sammed Shikharji, a Jain pilgrimage center in the Parasnath Hills, into a tourist destination. This upset the Jain community. This resulted in mass protests across the country against the Soren government’s decision. Jain community leaders had a special meeting with Union Tourism and Forest Minister Bhupender Yadav on this issue.

After a meeting with various representatives of the Jain community, Union Minister Parasnath directed the Jharkhand government to implement the sanctuary rules immediately. To this extent, the central government has decided to order the state government of Jharkhand to strictly implement the management plan of the Parasnath sanctuary, which prohibits the playing of loud music or the use of loudspeakers, as a result of the meeting.

Further, ‘desecration of religious and cultural importance like sacred monuments, lakes, rocks, caves, shrines, sale of alcohol, drugs and other intoxicants is prohibited. The tourism department also stated in the statement that unauthorized camping, trekking etc. are also prohibited on Parasnath hill. In this order, the state government has been ordered to strictly implement the ban on the sale and consumption of alcohol and non-vegetarian food items on Parasnath hill.