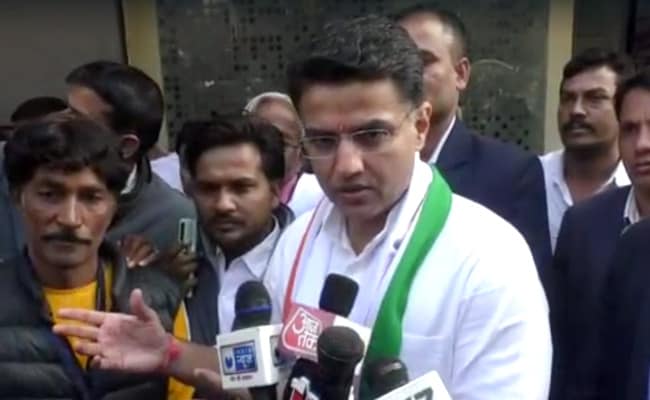 Congress leader Sachin Pilot on Wednesday again targeted the Ashok Gehlot government of Rajasthan in the exam paper leak case, while Pilot’s supporters, including a minister, advocated his appointment as the Chief Minister. While addressing a farmer’s conference in Jhunjhunu, Pilot also targeted the government for political appointments of retired bureaucrats instead of party workers. Pilot’s current comment reflects the internal differences of Congress in Rajasthan where CM Gehlot and his former deputy CM are face to face in the struggle for power.

The party had resolved these differences to a great extent when Rahul Gandhi’s Bharat Jodo Yatra passed through Rajasthan, but the ‘ceasefire’ seems to be temporary. Before Pilot’s address, Rajasthan SC Commission Chairman Khiladi Bairwa and Minister Rajendra Gudha said that the people of the state, especially the youth, want the former Rajasthan Congress President (Pilot) to be made the CM. Gudha said, “Everyone is asking when will Pilot become the CM. People are waiting.” Bairwa also said, “People ask me when Pilot will be made the CM and I tell them that the party high command will take a decision at the appropriate time.”

Pilot has been targeting the Gehlot government over the paper leak incident for the last two days. He has demanded that ‘big people’ related to the paper leak case be arrested. Responding to Pilot’s statement, CM Gehlot had said that action has been taken against the main accused. Gehlot also rejected the allegations of BJP leader Kirori Meena and RLP MP Hanuman Bainiwal that officers and leaders were involved in this paper leak. Addressing the rally, Pilot said that incidents of paper leak are happening one after the other and accountability should be fixed in this matter.

Pilot said, “Now it is being said that no official, leader was involved in the paper leak episode… So the copy of the examination which is kept in the vault reached the children outside the locked vault. Brother, this has become a witchcraft… how can it be like this. This is not possible.” Along with this, the pilot said, “Someone or the other will be responsible … and I am glad that the investigation is going on, I welcome this investigation. I assure that our party, our leader Rahul Gandhi and others, we have always worked to help the youth. On political appointments of retired bureaucrats, he said that an officer retires in the evening and at midnight he is given a job. Is appointed to another political post.

Pilot said, “Party workers who brought the Congress party to power by shedding their blood and sweat should be given respect. There have been many political appointments in the last four years. It doesn’t matter to the big officers whether the rule is of Congress or BJP. They do government job. Even if we have to give appointment to those people, then the ratio should be better. “The Congress leader said,” He may be a supporter of anyone, but if he is a Congress worker, he must have worked honestly for the Congress, give him a post. So we all will welcome him. But big officers retire at 5 in the evening and at 12 in the night they are appointed to other posts. Bureaucrats have been appointed to various posts.

Big news: Serious allegations against the president of the wrestling association, wrestlers sitting on dharna