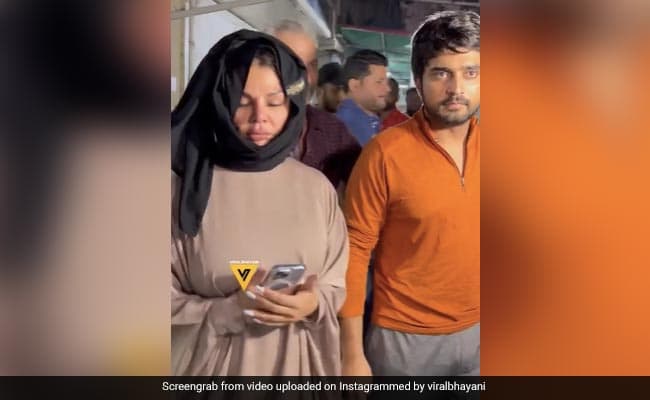 Rakhi Sawant has recently tied the knot with boyfriend Adil Durrani. She has done court marriage with Adil in the past. After marriage, now a very different style of Rakhi Sawant is being seen. After seeing which everyone is surprised. Rakhi Sawant has worn a burqa after marriage. Her video has also surfaced in the burqa, which is going viral. Wearing a burqa, Rakhi Sawant along with husband Adil has also gone to meet her sick mother in the hospital.

Celebrity photographer Viral Bhayani has shared a video on his official Instagram account. In the video, Rakhi Sawant is seen in a black and brown colored burqa. Along with this, his father Adil is also visible. In the video, Rakhi Sawant is meeting her mother with her husband. This video of Rakhi Sawant and Adil is going viral on social media. Let us tell you that in the past, he had shared pictures on social media while marrying Adil in court. However, after this there were reports that Adil was not accepting the marriage with Rakhi Sawant.

Rakhi Sawant herself confessed in front of paparazzi that Adil was not accepting her marriage, but Adil later accepted his marriage with Rakhi. Adil shared the wedding picture with Rakhi Sawant on his Instagram account. While sharing this picture, along with the announcement of marriage, Adil also told why he was silent about his marriage with Rakhi Sawant for so many days. Adil wrote in the caption of the picture, ‘So finally there is an announcement, Rakhi I never said that I have not married you. Just had to handle some things, so had to remain silent, Happy married life to us Rakhi (Pappudi).