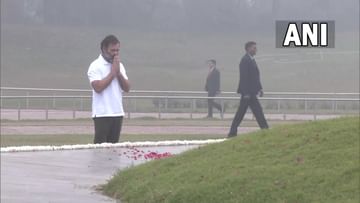 It is known that the Bharat Jodo Yatra led by Congress President Rahul Gandhi entered Delhi on December 24. This padayatra, which started from Kanyakumari on September 7, has covered nearly 3,000 kilometers with the determination to give the Congress party a leg up. Rahul has decided to take a break from the Yatra for a few days in the wake of Christmas and New Year and resume in January 2023. Rahul Gandhi paid tributes to former Prime Minister Atal Bihari Vajpayee on his birth anniversary the day after the Jodo Yatra reached Delhi (Sunday). Rahul Gandhi paid tributes to Mahatma Gandhi and other famous people and former prime ministers on Monday.

But while paying tribute, Rahul Gandhi was in a t-shirt. Congress leaders posted photos of Rahul Gandhi walking in a t-shirt in Delhi, where the temperature is 8-9 degrees Celsius, and they are going viral on social media. Netizens are expressing their surprise through their comments.

The entire world has been taught love and non-violence by the holy land of India. Taking these ideals in heart, seeing the footprints of Mother India’s children, we are moving ahead… pic.twitter.com/Dnei96W4G5

In this order, a netizen said, “The morning temperature in Delhi is 9 degrees Celsius.. Are you walking in a t-shirt? Where does Rahul Gandhi get such energy from?” he commented.

In morning temperature of Delhi was 9 degree Celsius.

“Why doesn’t he feel cold? Everyone is in coat and jacket. But he is seen in a half T-shirt. It is chilly in Delhi today. #RahulGandhi #BharatJodaYatra,” journalist Ajit Anjum tweeted in Hindi.

यार इस बंदे को को नहीं नहीन लाग रही है ? Sab is in coat and jacket, this band is seen in half t-shirt. While it is cold today in Delhi.#RahulGandhi #BharatJodaYatra https://t.co/jUo5eK8Vea

While netizens, Congress workers and fans are commenting as they like, some of them have compared Rahul Gandhi to the monks in the snow mountains. “Many people are talking about the T-shirt worn by Rahul Gandhi. Such mental, physical, emotional, spiritual strength.. power. Tahseen Poonawala tweeted, “It is obtained only because of meditation.” Netizens are expressing their reactions in the form of comments.