A bomb was found near the house of Punjab Chief Minister and Aam Aadmi Party leader Bhagwant Mann, causing an uproar in the state. 500 meters away from CM Bhagwant helipad on Monday.. 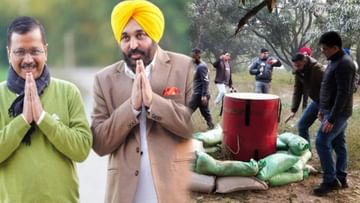 A bomb was found near the house of Punjab Chief Minister and Aam Aadmi Party leader Bhagwant Mann, causing an uproar in the state. On Monday (January 2), a bomb was found 500 meters away from CM Bhagwant Helipad i.e. on the border of Kansal in Chandigarh and Naya Gaon in Mohali. The news came to light when a tubewell operator in a mango grove first spotted it around 4 pm today and informed the authorities. The bomb disposal squad immediately reached the spot and defused the bomb.

But bomb disposal squad officials said that if this bomb had exploded, there would have been a big accident. Many questions are raised as the area where the bomb was found is not a traveling zone except for local people on foot.

Punjab Chief Minister Bhagwant Mann was not at his residence when the bomb was found. However, security has been tightened at his residence in the wake of this incident. Also Haryana Chief Minister Manohar Lal Khattar’s residence is nearby. What is special is that there is a CRPF camp just 200 meters away from the place where the bomb was found. When the bomb came to light, all the local people gathered at the scene. With this, the security forces descended on the field and took control of the entire area.