A huge number of cell phones and knives were found in the possession of hardened gangsters in jails. Around five officials have been suspended for providing such prohibited items to the inmates of the jails. 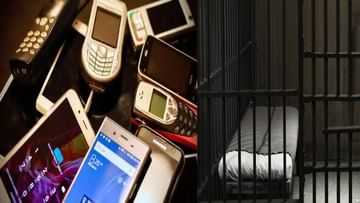 A huge number of cell phones and knives were found in the possession of hardened gangsters in the jails of the national capital. As many as five officers have been suspended for providing such prohibited items to inmates in jails. Director General of Prisons Sanjay Baniwal has issued instructions to the Superintendents of Jails to carry out inspections after receiving information that inmates are being given VIP treatment in many jails in Delhi.

In this order, mobile phones, knives, heaters, phone chargers and pen drives were found with the prisoners. 115 mobile phones were seized in the search operations carried out by the authorities in 3 jails of Tihar, Mandoli and Rohini in Delhi. Some mobiles were found with the gangsters. Along with phones, 3 knives, 1 room heater, 7 handmade heaters, 2 pen drives, 2 kettles were found. Officials have carried out inspections for the last 15 days after receiving accurate information regarding the respective jails. Five jail officials were suspended by Tihar DG Sanjay Beniwal.

That’s why he was transferred from Tihar Jail.

There are allegations against the jail authorities that the gangsters who are serving the sentence in the jail are doing their work outside the jail voluntarily. And the latest incident seems to have given fuel to these allegations. It is known that DG (Prisons) Sandeep Goyal was transferred from Tihar Jail in November. Chandrasekhar wrote a letter to Delhi Lieutenant Governor VK Saxena that AAP leader Satyender Jain had given Rs 10 crore to the authorities to provide security for him in jail. Chandrasekhar, who is serving sentence in Mandoli Jail in the 200 crore money laundering case, made sensational allegations against AAP leader Satyender Jain. On Friday (November 4), director general Sandeep Goyal was transferred from Tihar Jail after the video clips came out a few days after Chandrasekhar’s allegations. IPS officer Sanjay Beniwal has been appointed in his place.

Swastika Mukherjee reveals if she regrets her arranged marriage

What Not To Eat In Periods: Do Not Consume Flour, Pickles And Tea, Coffee To Avoid Period Pain And Cramps, NDTV HINDI, NDTV India