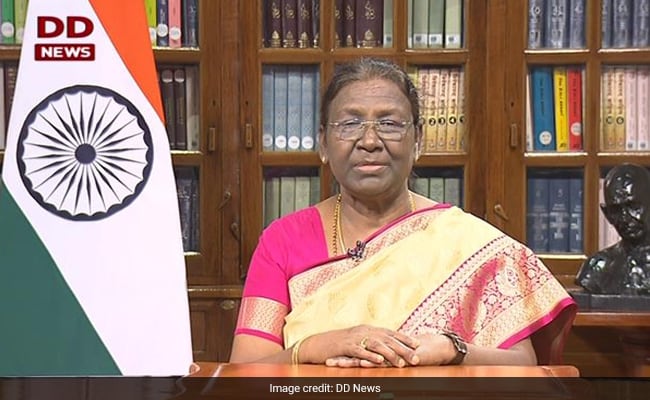 Highlights of the President’s address

We are all one, and we are all Indians. So many creeds and so many languages ​​have not divided us but united us. That’s why we have succeeded as a democratic republic. This is the essence of India.

Moving ahead from the status of a poor and illiterate nation, India has become a confident nation on the world stage. This progress would not have been possible without the guidance from the collective wisdom of the framers of the Constitution.

Last year India became the fifth largest economy in the world. This achievement has been achieved against a global backdrop of economic uncertainty. With the help of able leadership and effective struggle, we soon came out of the recession and resumed our journey of development.

The National Education Policy prepares the learners for the challenges of the 21st century and makes the knowledge based on our civilization relevant to contemporary life.

Women empowerment and equality between women and men are no longer mere slogans. There is no doubt in my mind that women will make the maximum contribution in shaping the India of tomorrow.

This vision of empowerment guides the working of the government for the weaker sections of the people, including the Scheduled Castes and the Scheduled Tribes. In fact our aim is not only to remove obstacles in the lives of those people and help in their development, but also to learn from those communities.

People from tribal communities can teach a lot in many areas, from protecting the environment to making society more united.

This year India is presiding over the group of G-20 countries. In line with our ideal of universal brotherhood, we stand for peace and prosperity for all. The presidency of the G-20 gives India a very important role in contributing to building a better world.

– In my opinion, global warming and climate change are such challenges which have to be faced quickly. The global temperature is rising and extreme forms of climate change are visible. To maintain the balance between development and environment, we have to look at the ancient traditions from a new perspective. We also have to reconsider our basic priorities. Scientific dimensions of traditional life-values ​​have to be understood. If we want our children to lead a happy life on this earth, then we need to change our lifestyle.

– The United Nations has accepted India’s suggestion and declared the year 2023 as ‘The International Year of Millets’. If more and more people include coarse grains in their diet, it will help in environmental protection and also improve the health of the people.

I appreciate the roles of farmers, labourers, scientists and engineers whose collective strength enables our country to move forward in the spirit of “Jai Jawan, Jai Kisan, Jai Vigyan, Jai Anusandhan”.