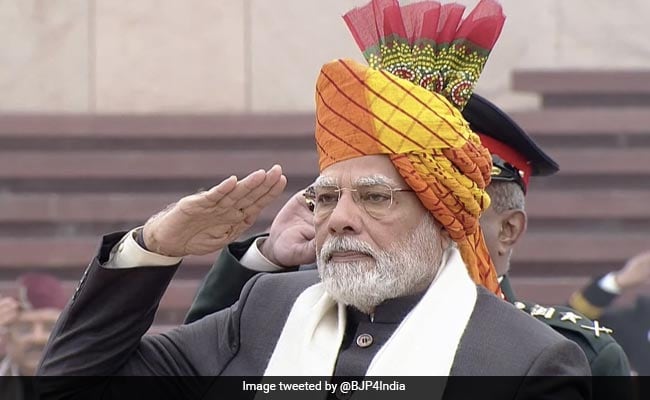 New Delhi: Prime Minister Narendra Modi is seen in a special turban on special occasions like Independence Day and Republic Day. Even in the Republic Day 2023 celebrations, PM Modi is seen in a special and very attractive turban. Today, on the occasion of Basant Panchami, PM Modi’s turban is giving Basanti message at the Republic Day parade ceremony. Till now PM Modi has been seen more in the turban of Bandhej work. Even today his turban is of bandhej work only. Yellow and saffron color is visible in the turban.

Prime Minister’s turban i.e. Safa remains a topic of discussion every time. Before this, if we talk from 2015 to 2022, PM Modi has been seen in a different and attractive dress every time. In 2015, on the occasion of Republic Day, Prime Minister Narendra Modi wore a colorful Rajasthani bandhani turban.

Prime Minister Mr. @narendramodi Paying homage to the martyrs at the National War Memorial on the occasion of 74th Republic Day. #RepublicDaypic.twitter.com/9B8tTESzsr

On Thursday, on the occasion of 74th Republic Day, Prime Minister Modi visited the National War Memorial and paid tribute to the martyrs. On this occasion, Defense Minister Rajnath Singh, Minister of State for Defense Ajay Bhatt, Chief of Defense Staff General Anil Chauhan and the heads of the three defense services were also present.