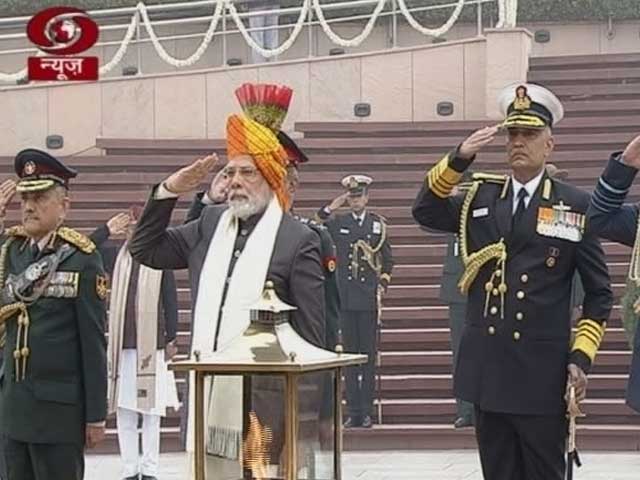 PM Modi inaugurated the National War Memorial on 25 February 2019 and dedicated it to the nation.

New Delhi: The country is celebrating 74th Republic Day today. Prime Minister Narendra Modi paid tribute to the martyrs by visiting the National War Memorial on the occasion of 74th Republic Day on Thursday. On this occasion, Defense Minister Rajnath Singh, Minister of State for Defense Ajay Bhatt, Chief of Defense Staff General Anil Chauhan and the heads of the three defense services were also present. Dressed in saffron and yellow turban, the Prime Minister also signed the visitor’s book there after paying homage to the martyrs. Green and blue color design was also seen on his turban.

The memorial has an eternal flame which exemplifies the supreme sacrifice made by a soldier in the line of duty and thus makes him immortal. Since its inauguration, all tribute ceremonies, including the tribute ceremony on National Day, are being held only at the National War Memorial.

On January 21 last year, the Amar Jawan Jyoti from India Gate was merged with the eternal flame of the National War Memorial with full military honours.