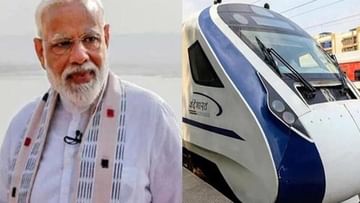 West Bengal Will Get Its First Vande Bharat Express, PM Modi Will Flag Off On 30th December

PM MODI: Prime Minister Narendra Modi will visit West Bengal on Friday, December 30. About Rs. Foundation stones and inauguration ceremonies will be done for development projects worth 7800 crores. He will also participate in the 2nd meeting of the National Ganga Council to be held in Kolkata under the chairmanship of Prime Minister Narendra Modi. Vande Bharat Express will be flagged off from Howrah in West Bengal to New Jalpaiguri Junction. The Prime Minister will inaugurate the Joka-Taratala stretch of Kolkata Metro’s Purple Line. The Prime Minister will dedicate multiple railway projects to the nation. The Prime Minister will also lay the foundation stone for the redevelopment of the New Jalpaiguri Junction Railway Station. On Friday morning, the Vande Bharat Express will reach Howrah railway station and from there till New Jalpaiguri Junction will be formally launched. Besides laying foundation stones for various railway projects, others are also dedicated to the nation. At 12 noon, garlands will be offered at Netaji Subhas Chandra Bose’s statue. Also Dr. Shyama Prasad Mukherjee – He will inaugurate the National Institute of Water and Sanitation. He will lay foundation stones for multiple sewage infrastructure projects for West Bengal under the National Mission for Clean Ganga and dedicate it to the nation. He will chair the 2nd meeting of the National Ganga Council to be held in Kolkata on December 30 (Friday) as part of promoting cooperative federalism in the country. Union Hydropower Minister Gajendra Singh Shekawat, other Union Ministers who are members of the Council, Chief Ministers of Uttarakhand, Uttar Pradesh, Bihar, Jharkhand and West Bengal will attend this meeting. It is known that the National Ganga Council has been set up to monitor and prevent pollution of the river Ganga and its tributaries.

About Rs. The Prime Minister will inaugurate the Dr. Syama Prasad Mukherjee – National Institute of Water and Sanitation, developed at Joka on Diamond Harbor Road, Kolkata at an estimated cost of Rs 100 crore. The organization acts as an apex body in the country on water, sanitation and hygiene in the country.