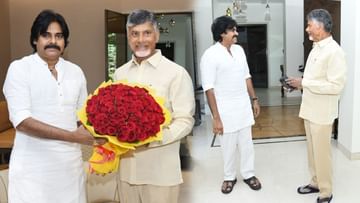 Jana Sena chief Pawan Kalyan met TDP chief Chandrababu Naidu. Chandrababu welcomed Pawan Kalyan who went to the TDP chief’s residence in Hyderabad. Later, Pawan met Chandrababu. On this occasion, the leaders of both the parties are holding lengthy discussions on many issues. It seems that the two leaders will discuss the recent political developments in AP, alliances in the upcoming elections and other issues. The two leaders meeting once again within a period of 3 months has become a topic of discussion. It is reported that a joint action will be announced to strengthen the platform for the protection of democracy. It is said that a discussion is going on between the two on this issue. The leaders of both the parties are discussing the cancellation of the roadshows brought into effect by the AP government and the sanctions. It seems that during Chandrababu’s visit to Kuppam, there was a discussion about the police restrictions and the tense situation during Pawan’s Vizag tour. It is reported that a joint fight will be organized against government restrictions. Politicians are stating that there is a possibility of announcing a joint operation especially on Jio No. 1.

Meanwhile, the two leaders have already decided to fight unitedly against the anti-people policies of the government. They met in a hotel in Vijayawada on October 18 last year. Many topics were discussed. It is reported that JVO No. 1 brought by the AP government is being discussed in the latest meeting. The latest meeting between Chandrababu and Pawan has gained importance in the context of the campaign that there will be an alliance between TDP and Janasena in the next elections.

It is known that there was tension during Pawan’s visit to Visakha in the past. Then Chandrababu expressed solidarity with Pawan. Now after the visit to Kuppam, Pawan Kalyan came to Chandrababu’s house and held discussions, AP politics got more heated. Janasena Yuvashakti Sabha will also be discussed in Srikakulam on 12th of this month. The Jana Sena has already objected to the many restrictions imposed by the police on the programme. TDP and Jana Sena are attacking the YS Jagan government saying that the government is targeting the opposition.