PAK vs NZ 1st Test: Pakistan avoided a fifth straight defeat at home by drawing this match. Earlier, the team had lost four Test matches in a row at home. 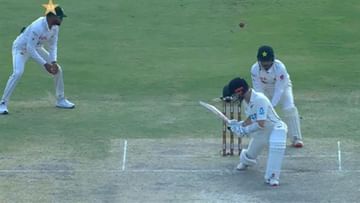 PAK vs NZ 1st Test: The first test match between Pakistan vs New Zealand ended in a draw. A feat that happened 18 years ago in Test cricket was done in this match. In this, Pakistan was penalized for five runs in both innings. The Kiwis were penalized for five runs in two innings during New Zealand’s batting. In both the innings, the ball hit Pakistan wicketkeeper Sarfraz Ahmed’s helmet. Thus New Zealand received a penalty of 5 runs in two innings.

Earlier in the 2004 Test match between India and Australia, the ball came out after hitting the wicketkeeper’s helmet in both innings. This happened once again after 18 years in Test cricket. In both the innings, the ball hit the wicket keeper’s helmet and the team was penalized for 5 runs.

Sarfaraz Ahmed returned to the Pakistan Test team after about four years in this first Test match against New Zealand. Sarfaraz scored a half century in both innings of this match. He added 86 runs with the help of 9 fours in the first innings. In the second innings he hit 7 fours and scored 53 runs. This will be Sarfaraz’s 50th Test match. Earlier, he played his last Test match on January 11, 2019 against South Africa in Johannesburg. He also scored a half century in the first innings of that match.

Pakistan has drawn the fifth Test in a row at home.

By drawing this match, Pakistan avoided a fifth straight defeat at home. Earlier, the team had lost four Test matches in a row at home. In this they lost one match against Australia and three match series against England.