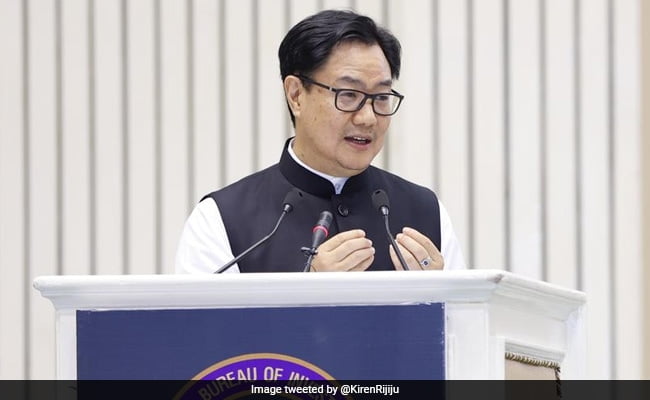 Amid rising conflict between the government and the judiciary over judicial appointments, Union Law Minister Kiren Rijiju has strongly objected to the Supreme Court making public its objections to the candidates recommended for judges. Last week, the Supreme Court Collegium, headed by Chief Justice of India DY Chandrachud, made public the government’s objections to the elevation of three candidates for judgeship on the SC website. The Supreme Court had taken the unprecedented step of declassifying the documents of the intelligence agencies – Research and Analysis Wing (RAW) and the Intelligence Bureau (IB) – amid a confrontation with the government over its objections.

Rijiju said on Tuesday that he would “react at the appropriate time” but clarified his stand on the issue. Speaking to reporters, the law minister said, “The disclosure of secret and sensitive reports of RAW or IB is a matter of grave concern to which I will respond at an appropriate time. Today is not the appropriate time.” Taking it up with the Chief Justice, the Law Minister said, “The Chief Justice and I meet often. We are always in touch. He is the head of the judiciary, I am the bridge between the government and the judiciary.” He said, “We have to work together – we cannot work in isolation. This is a contentious issue…let’s leave that for another day.”

In fact, the government has been pressing for a greater role in the appointment of judges, which since 1993 has been the domain of the Supreme Court collegium or panel of senior-most judges. The government’s argument is that the legislature is supreme as it represents the will of the people.Earlier, Law Minister Rijiju had said on Monday that since judges are not elected, they do not face public scrutiny, but people Let’s look at them and assess them in the way of giving justice. He had said that due to social media, common citizens ask questions to the government and they should do so. The government is attacked and questioned “and we face it.” The minister had said, “If people elect us again, we will come back to power.” If they don’t choose, we will sit in the opposition and question the government. On the other hand, if a person becomes a judge, he does not have to face election, he said. “There is no public inquiry of judges,” he said.