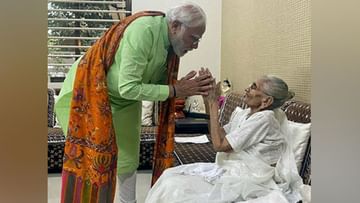 The Prime Minister recalled his small mud-walled house in Vadnagar with his parents and siblings. The Prime Minister talked about the problems his mother faced and successfully overcame. He said how his mother not only does all the housework herself, but also works to earn a little income to support the family. Prime Minister Narendra Modi recalled that apart from washing dishes in some houses, she used to spend time spinning the charkha for household expenses, and during rains our roof would leak and the house would get flooded. Prime Minister Modi recalled the circumstances of those days when his mother used to place buckets and vessels under the leaks to collect rainwater, symbolizing his mother’s resilience in these adverse conditions.

Speaking about cleanliness, the Prime Minister said that his mother was always very special in this regard. PM Modi said that his mother has great respect for those who strive for cleanliness. Prime Minister Modi said that when someone came to clean the drain next to their house in Vadnagar, his mother would not let them go without giving them tea. A close friend of his father lived in a nearby village, and after his untimely death, my father brought his friend’s son Abbas to their home, and Abbas completed his education while staying with them, PM Modi said in his blog on his mother’s centenary. This is how Prime Minister Modi remembered the hardships of his mother.