Heeraben Modi Funerals: Prime Minister Narendra Modi’s mother Heeraben Modi passed away early this morning due to illness.. Her last rites ended at Gandhinagar crematorium. A very simple funeral was conducted. He learned that his mother had died. 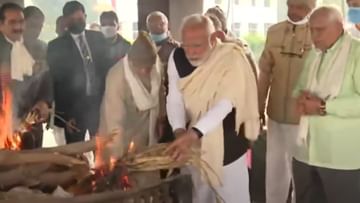 PM Modi Mother Funeral: Prime Minister Narendra Modi’s mother Heeraben Modi died this morning due to illness.. Her last rites ended at Gandhinagar crematorium. A very simple funeral was conducted. Prime Minister Modi reached Ahmedabad immediately after learning about the death of his mother. Earlier, the body of Prime Minister Modi’s mother Heeraben was brought directly from the UN Mehta Hospital to her son Pankaj Modi’s home in Raison village, Brindavan society. After reaching Ahmedabad from Delhi, the Prime Minister directly reached brother Pankaj Modi’s house and paid his respects to his mother. After the visit, the sons and important family members took them to the crematorium in Sector 30, Gandhinagar in a vehicle for the last rites. In this order, the Mother Pada was carried by Prime Minister Modi himself. After that, Prime Minister Modi reached the crematorium along with the body in the vehicle. The last yatra was usually performed without any haste. They said that their family members will attend the funeral, and in this context, BJP workers and fans have appealed to them not to disturb their arrival.

The Chief Ministers of various states, heads of various political parties, public representatives, political dignitaries and other dignitaries from various fields have also condoled the death of the Prime Minister’s mother Heeraben. Deepest condolences to the family members. In the morning, all the family members reached Pankaj Modi’s house and paid their respects to Hiraben Modi.

#WATCH | Gujarat: Heeraben Modi, mother of PM Modi, laid to rest in Gandhinagar. She passed away at the age of 100, today.

#WATCH | Gandhinagar: Prime Minister Narendra Modi carries the mortal remains of his late mother Heeraben Modi who passed away at the age of 100, today. pic.twitter.com/CWcHm2C6xQ