FIH Hockey World Cup Tickets: Just a few days left for the start of the Hockey World Cup in India. In such circumstances, the tickets of all the World Cup matches to be held at Rourkela are sold out within a week. 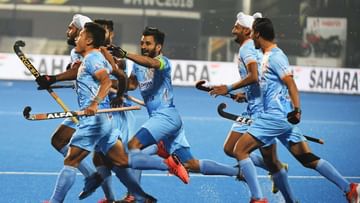 A few days left for the Hockey World Cup to be played in India. As this tournament approaches, the excitement of hockey fans reaches its peak. This time the World Cup will be held in Bhubaneswar and Rourkela in Odisha. The Hockey World Cup to be held in India will start from January 13. 16 elite teams from all over the world will participate in this competition. Meanwhile, ticket sales in Rourkela have started from December 19. However, all the tickets were sold out within a week.

Hockey World Cup for the first time in India

For the first time, the World Cup matches will be held in Raulkela, Odisha. Here on December 19, a large number of hockey fans gathered outside the newly constructed Birsa Munda Hockey Stadium. All the tickets were sold within a week. For the past few years, fans have been showing immense love for hockey.

The 20 matches of the Hockey World Cup will be played at the newly constructed Birsa Munda Stadium in Rourkela. This stadium has a seating capacity of 20 thousand spectators. While the famous Kalinga Stadium in Bhubaneswar has a seating capacity of 15 thousand spectators. 24 matches of the World Cup will be held at the Kalinga Stadium. It includes important matches like quarter-final, semi-final, world cup finals. India got a place in Pool D.

This is the schedule of Team India.

How much are the tickets?

Namely a bowler.. He came to bat at the 9th position.. He scored a century with 11 fours and 4 sixes.. | Parth Bhut stuns Punjab, Hits Century In Ranji Trophy Quarter Final

Union Budget 2023-24 Updates: Nirmala Sitharaman Talked About Promoting Shri Anna Apart From Tax Slab, Said- It Is Healthy, Know What Is Shri-Ann And Its Benefits , Told

Andrea Riseborough’s Oscar nomination will not be revoked, states The Academy | Hollywood