The big thing now is that Mukesh Ambani’s Reliance Industries has made huge profits due to the formula used to determine gas prices in the UPA government. 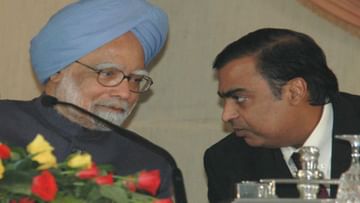 The argument that the BJP government is helping Adani’s growth has been heard heavily till now. But the claims that the governments at the center are working for corporates like Ambani and Adani are often heard outside the news. But at such a time more allegations like a bomb came to light. Now the big issue is that Mukesh Ambani’s Reliance Industries has profited hugely due to the formula used to determine gas prices under the UPA government. But it was the then former Cabinet Secretary KM Chandrasekhar who disclosed this matter. Based on his book “As Good As My Word: A Memoir” written by him, BJP recently brought its argument to light. In this book, many decisions taken by Manmohan Singh government have been discussed in this book.

However, former cabinet secretary KM Chandrasekhar, whose book “S Good Is My A Memoir” shook the Congress party, spoke exclusively to TV9. He gave in-depth details about how the UPA government led by former Prime Minister Dr. Manmohan Singh was in favor with Mukesh Ambani’s Reliance Industries. He said that Mukesh Ambani’s Reliance Industries Limited showed favoritism in fixing gas prices during the UPA regime. TV 9 Bharatvarsh spoke exclusively to KM Chandrasekhar about this sensational claim.

Answer by Chandrasekhar: I was the Cabinet Secretary at that time. That’s when it all started. I was asked to prepare a report. I read it completely. The corporate house saw that the tender was taken at two and a half dollars. They also made a deal. But a new formula has emerged. I gave four more dollars and told them not to do this.

What is the deal?

Question: Sir what is the deal? What did you write about in the book? Which corporate body influenced the UPA government in the gas deal?

Answer: I have explained this in detail in the book. This was the agreement of the then Congress government with Mukesh Ambani.

So why this revelation now?

Now the question is why KM Chandrasekhar himself revealed these things after all these years when he was the Cabinet Secretary.

Question: The book you have written, that book has many controversial points. Did you hesitate while writing the book..? Because you were the Cabinet Secretary at the time. All the elements are in front of you.

Answer: Whatever I wrote I wrote neutrally. I wrote about two governments. Knowing that I have not created any controversies, I wrote what just happened. It is not written like that, as much as it needs to be controversial. No matter what happens, the truth must be told. That’s why I had to write in detail.

What is actually in that book..

KM Chandrasekhar has given the details in his book that many mistakes were made in the process of fixing gas prices in the country. Mukesh Ambani said that the government has come up with such a formula for gas price. Considering the price of crude oil at that time.. the price of gas was more than 4.5 dollars per unit. At the same time, an agreement was reached to supply gas to Anil Ambani’s power plants at a rate of 2.3 mmbtu. However, Chandrasekhar revealed that the rate has been fixed at 2.3 dollars per unit based on the government NTPC tender. Later the case went to court.