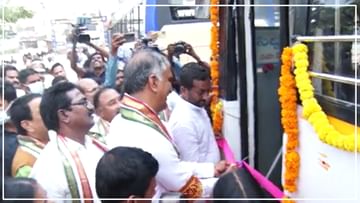 Competitive challenges, counters to counters. There is high tension in the background of political heat. BRS and BJP activists gathered in large numbers as expected in the background of official programs in Dubbaka. Despite the massive police presence, there was tension at one stage. The BJP workers were angry that the police were treating the BRS workers in one way and them in another way.

Local BJP MLA Raghunandan Rao demanded that MP Prabhakar Reddy resign and come to the polls. They will say something if they resign. Raghunandan Rao said that the official functions should be conducted peacefully. Minister Harish and MLA Raghunandan attended the opening ceremony along with four other ministers.

The four ministers are going to Dubbaka in a short time in the face of continuing heated words between the leaders. Due to this, the police made a heavy security. The four ministers are participating in various development programs. A new bus stand constructed at a cost of 4 crore rupees will be inaugurated in Dubbaka town. In this event, BRS will take out a huge bike rally from Habsipur to Dubbaka. Later, the party flag will be unveiled near Dubbaka Bus Stand. The Ministers who are going to start the work of expansion of Dubbaka- Mustabad road will participate in the congratulatory meeting of the New Agricultural Market Committee of Dubbaka.