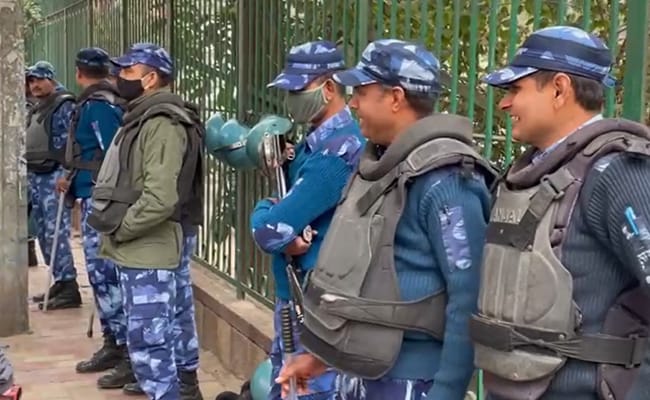 Police have detained three students at Delhi’s Jamia University for spoiling the atmosphere by announcing the screening of BBC’s documentary on Prime Minister Narendra Modi. 7 other students protesting against the detention of students have also been taken into custody by the police. This action has been taken on the complaint of the Chief Proctor. According to the police, the security of Jamia University has been tightened regarding the incident.

Amidst the uproar, all the gates of Jamia University have been closed. Students are not being allowed to enter it. Jamia students had said that they would show BBC’s documentary ‘India: The Modi Question’. But Jamia University denied them permission. However, the students remained adamant on showing the documentary at gate number-8 at 6 pm today. The university issued a notice to the students.

Despite the notice issued by the Jamia administration, the banned and controversial documentary of BBC was being organized at MCRC lawns at gate number-8 at 6 pm on Wednesday. Jamia University had not given permission regarding this.

After this, security has been tightened in Jamia. Meetings and gatherings are not allowed in the lawn and at the gate. At the same time, strict disciplinary action has been said against the organizers.

On behalf of the university administration, it has been said that information has come that some students belonging to a political organization (SFI) have circulated a poster about the screening of a controversial documentary film in the university campus today. The University Administration has issued a memorandum/circular in the past and once again reiterates that no meeting/gathering of students or screening of any film will be allowed in the campus without the permission of the competent authority, failing which Strict disciplinary action will be taken against the University is taking all possible measures to prevent people / organizations from destroying the peaceful academic atmosphere of the University.

A documentary based on Prime Minister Narendra Modi’s tenure as Gujarat chief minister during the 2002 riots has been banned, with the government asking social media companies to remove it. The opposition has criticized the move.

PM Modi’s government has termed the documentary ‘India: The Modi Question’ as a ‘propaganda piece’. He has been cleared of any wrongdoing in the Gujarat riots investigation. Last year, the Supreme Court rejected an appeal against his acquittal in a case related to the murders.

In 2002, a coach of a train carrying pilgrims was set on fire in Godhra, Gujarat, killing 59 people. After this, more than 1,000 people were killed during three days of violence in the state. It is alleged that the government deliberately did not take adequate measures to stop the riots that started.