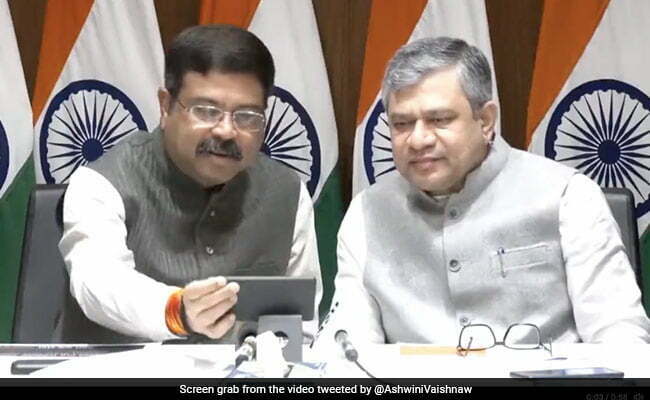 He said, “Congratulations to everyone involved in developing this system… Eight years back when our Prime Minister Narendra Modi ji first talked about ‘Digital India’, some of our friends made fun of him, But today, after eight years, technocrats, innovators, industry and policy makers, and even the country’s educational institutions have accepted his vision…”

Union Telecom Minister Ashwini Vaishnav was also present on this occasion. He said, “There will be problems along the way and there are many people around the world who will create problems and do not want any such system to succeed…”

The Government of India has funded a project to develop BharOS to develop a free open-source operating system for use in government and public systems. The project aims to reduce dependence on foreign operating systems in smartphones and promote the use of indigenously developed technology. This operating system is a big leap towards creating an indigenous ecosystem and a self-reliant future.

BharOS services are currently being provided only to organizations that have enforced strict privacy and security regulations, and whose users have experience in handling sensitive information while conducting confidential communication through restricted apps on mobile phones. Such users need access to private cloud services through private 5G networks.

BharOS was created by JandK Operations Pvt Ltd (JandKops), developed by IIT Madras Innovative Technologies Foundation, a company established by IIT Madras under section 8 (not for profit). The Foundation is funded by the Department of Science and Technology (DST), Government of India, under the National Mission on Interdisciplinary Cyber-Physical Systems (NMICPS). It is an attempt to bring India at par with the few countries which currently have such capability.

Addressing a press conference on January 19 to announce this Indian mobile operating system, Professor V. Kamakoti, Director of IIT Madras had said, “BharaOS is a mobile operating system built on the foundation of trust, In which the focus is on giving more freedom to the user, so that they can choose and use only those apps which are necessary for them… This new system makes any user think about security and privacy on his mobile phone. has the potential to change the way…”

He also added, “IIT Madras looks forward to working closely with many other private industries, government agencies, strategic agencies and telecom service providers to increase the use of WearOS in our country…”

OS X comes with no default apps (NDA), which means users are not forced to use apps they are not familiar with or cannot trust. In addition, this approach also gives users more control over the permissions that apps have on their device, as they can choose to grant permissions only to apps that they trust.

According to Karthik Iyer, director of JandK Operations Pvt Ltd (JandKops), the startup that developed this mobile operating system, “In addition, BharOS provides ‘Native Over the Air’ (NOTA) updates, which help in keeping the devices secure.” Could… NOTA updates are automatically downloaded and installed on the device, without the user having to do so manually… This ensures that the device is always running the latest version of the operating system, with the latest security patches and bug fixes are included… With NDA, PASS, and NOTA, BharatOS ensures that Indian mobile phones remain trusted…”

iOS enables access to trusted apps over organization-specific Private App Store Services (PASS). PASS provides access to a curated list of apps that have been thoroughly tested and meet the organization’s security and privacy standards. This means that users can be sure that the apps they are installing are safe to use.

— read this also —
* Rahul Gandhi had set a great vision by leaving the post of Congress President: Pilot)
* America said this on BBC documentary related to PM Narendra Modi and Gujarat riots
* “The train will be silent…”, said a stunned neighbor after the California shooting