Nandamuri Balakrishna takes care of the heroine as much as he cares about the best script, mass dialogues, action and emotions. Those who have seen his movies in recent times will understand this. 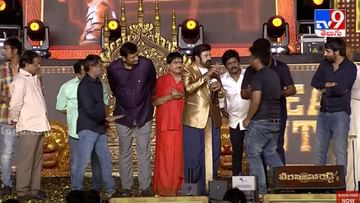 Balayya roared in Ongole. Veerasimha Reddy pre release event is packed. People gathered in thousands. Balayya fans raised dust with slogans. Overall the function is a super hit. But a funny incident came to light in this event. While Balayya was speaking.. a fan came to the stage silently. No one there noticed him. In this order, a fan who came to Seeda Balayya put a stick on the actor’s legs. Unexpectedly, Balayya asked in a funny way, should he do a hair cutting? This caused laughter. After that, the fan asked him to give the mic to speak.. Balayya refused. Then they sent him away. The video will soon go viral.

Veera Simha Reddy is a mass action entertainer starring Nandamuri Balakrishna. The makers have also taken the promotion of this movie as prestigious as it is being released around Sankranti, which suits Balayya well. That’s why the pre-release event was grand. It is common to release films throughout the year, but it is a different story when a film is released on Sankranti. It is as if the real festival has arrived only when the stars are buzzing in the theater along with the new weddings and cockfights.

Knowing the taste of Telugu people, Nandamuri Balakrishna is definitely planning to come to Sankranti. Nandamuri Balakrishna charisma is said to be unstoppable. Balayya made an unexpected OTT entry and seemed unstoppable. Even on the silver screen, that charisma is being continued unhindered. The same craze is seen in Veerasimha Reddy, which will be released on Sankranti.