Union Minister Amit Shah has announced that the construction of Ayodhya Ram Mandir will be completed by January 1, 2024. It has been clarified that the opening ceremony of the temple will be celebrated on that day. Amit Shah, who participated in a meeting in Tripura, made these comments. 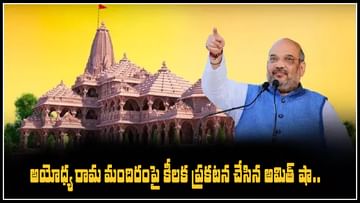 Ayodhya Ram Mandir will be inaugurated on January 1, 2024

Union Home Minister Amit Shah made a key statement on the Ram Mandir in Ayodhya. Announcing that the construction work of the temple will be completed by January 1, 2024, Amit Shah said that the inauguration ceremony of the temple will also be held on the same day. Amit Shah, who participated in a rally in Tripura on Thursday, made this great announcement. In this order, he also criticized the Congress that the Congress has been blocking the construction case of Ram Mandir in the courts for a long time and that the Supreme Court’s verdict on this matter was issued only after Prime Minister Narendra Modi came to power.

Addressing a rally in Tripura, Amit Shah said, “Since independence, the Congress has blocked the Ram Mandir issue. The Supreme Court verdict was issued after Prime Minister Modi came to power. Later, Prime Minister Modi performed Bhoomi Puja for the construction of the temple on August 5, 2020. After that, the construction of the temple started,’ he said. But the next general elections will be held in 2024 itself. The BJP, which has been in power at the Center for almost eight and a half years, is looking to show its power in the upcoming elections as well. In this context, it is no exaggeration that Amit Shah’s statement on Ram Mandir will give a lot of strength to BJP.

According to the latest plan, the temple trust will also build temples of Valmiki, Kevat, Sabari, Jatayuvu, Sita, Vigneshwara (Ganesh), Seshavatar (Lakshmana) in an area of ​​70 acres around the Ram Mandir. A two-storied circular road will also be constructed in a rectangular shape, covering the total area of ​​eight acres of land including the temple area and its premises. It has a sandstone entrance on its eastern side. White marble from the Makrana Hills of Rajasthan will be used inside the sanctum sanctorum of the temple.