Former Minister of Andhra Pradesh and YSRCP MLA Parney responded with sarcasm on Bharat Rashtra Samithi. Speaking at a media conference on Monday, he answered several questions asked by reporters. 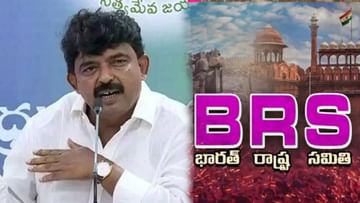 Former Minister of Andhra Pradesh and YSRCP MLA responded with sarcasm to Bharat Rashtra Samithi. Speaking at a media conference on Monday, he answered several questions asked by reporters. They also reacted to BRS and Congress parties competing in the upcoming Andhra Pradesh assembly elections in that order. It is certain that BRS, Congress and BJP will compete in the Andhra Assembly elections. He said that KA Paul’s party will also contest in 175 constituencies of the state. He opined that it would be wrong for BRS to compete in such a context. He deposed that Telangana ministers are scared and they talk about Andhra Pradesh.

Talking about the leaders of Telangana, ‘What will KCR do in AP..? How they praise AP! Is there no illegal electricity consumption in Srisailam, Sagar, Pulichinthal? Who is backing AP? Do they praise AP? Shame a little bit. Did they distribute our assets and give us money? They took away our property. Did you pay electricity dues? Will you betray AP and talk now! If there is anything, it should be looked into in Telangana’, Nani was fired.

Meanwhile, before Perni Nani, State Tourism Minister Roja also reacted to KCR-led BRS party contesting in the upcoming AP Assembly elections. ‘Anyone can hold parties and compete. Andhra Pradesh was unjustly divided. Partition issues are still not resolved. AP suffered a lot due to partition. That party should come to AP and give an answer first. Chandrababu has damaged AP by obstructing the vote with the note case. He said that the people who join the party should talk about them first.