Janasena president Pawan Kalyan met TDP chief Chandrababu. This meeting was held at Chandrababu’s residence in Hyderabad.. After the meeting, both spoke together in a press meet. 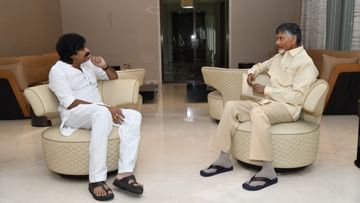 Janasena president Pawan Kalyan met TDP chief Chandrababu. This meeting was held at Chandrababu’s residence in Hyderabad.. After the meeting, both spoke together in a press meet. These two leaders, who decided to fight unitedly against the anti-people policies of the YCP government in AP, severely criticized the government’s decisions. The two leaders were fired saying that the YCP government is acting anarchically and anarchy is going on in the state. They discussed the problems of farmers and people, taking away pensions. Pawan was fired saying that the opposition was being suppressed by the British-era Jivo, he was also blocked in Vizag and Chandrababu was also blocked in Kuppam. In this meeting, the issue of how to fight Jio No. 1 was discussed.

Chandrababu’s comments in the press meet..

Is there no democracy in the state? Pawan stopped now. All sorts of difficulties were caused by sanctions. Wherever I go, they stop me. If we fight against ganja and drugs, our office was attacked. All the systems in the state have been destroyed. Public life has become dark. Will you bring the creatures of the British period? Will you bring a black creature and act like a maniac? Will you block me in my own constituency? Will cases of attempted murder be filed against women? Democracy needs to be preserved. Kandukur and Guntur incidents are YCP conspiracy. The conspiracy was executed by the police. What is the reason for not giving permission to meetings? Do not give permissions to the movie people too? We will take this matter to the attention of the center if necessary. The Governor has to protect the Constitution. Center should also intervene. There is a situation worse than emergency in AP,’ said Chandrababu.

YCP anarchies are increasing in the state. They are killing democracy. We have already established a platform for the protection of democracy. Again we will take the responsibility of assessing the development of AP. Today we have discussed only Jive Number-1. The government said not to set up flexi in the state. But, on the day of Jagan’s birthday, flexi were put up everywhere. Functions were also done during covid. Police are responsible for crowd control. Kandukur and Guntur incidents took place due to security failure. If YCP’s welfare schemes are really available to people.. why so many people came to Guntur Sabha? We will also discuss with BJP about YCP anarchy. Let’s not split the anti-YCP vote. What else do YCP leaders talk with their mouths? If I step out and ask, they will be embarrassed. What is the problem with them if I take a Varahi cart? Can they buy vehicles with crores of rupees?’ Pawan fired at YCP leaders in a range.

Pawan welcomed the entry of BRS into AP.

At the same time, Jana Sena’s Pawan reacted to BRS’s entry into Andhra Pradesh politics. He welcomed the arrival of BRS. Pawan said that according to the Constitution of India, they have freedom and they have their own opinions.