Union Home Minister Amit Shah will visit Telangana on 28th of this month. BJP MP Soyam Bapu Rao said that the Lok Sabha campaign will be started from Adilabad district. 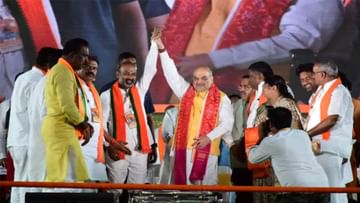 Kamal Nath put special focus on Telangana. Power is the target. Activity is being intensified. Bharatiya Janata Party, which has already gained full control in North India, is now moving forward with a huge plan to bring South India under its control. It is in this context that the BJP leadership has paid special attention to Telangana. It is for this reason that the top leaders of that party often come to Telangana. While giving direction to the party leaders on one hand, on the other hand special programs are being planned to instill enthusiasm in the ranks of the public.

It is known that Prime Minister Narendra Modi visited Telangana this month as part of this. As part of this trip, he spent Rs. 7 thousand crore projects will be launched. A few days after his visit, Union Home Minister Amit Shah will also come to Telangana.

Union Home Minister Amit Shah will visit Telangana on 28th of this month, MP Soyam Bapurao said. Amit Shah will visit Adilabad on 28th of this month as part of Parliament Prawas Yojana. It has been revealed that a huge public meeting is being arranged in Adilabad city for this purpose. MP Soyam Bapu Rao expressed happiness over the start of Parliament Prawas Yojana from Adilabad.

He expressed confidence that BJP will win ten out of ten seats in Adilabad in the upcoming assembly elections. MP Soyam Bapurao said that they are moving forward with a clear plan.

As part of Amit Shah’s visit, he will review the appointment of booth committees, mandal and other level committees in 17 Lok Sabhas and 119 assembly constituencies of the state.

It is known that in late December last year, BJP National President JP Nadda launched 2.0 of the party’s Lok Sabha campaign. Through this programme, the BJP has put special focus on the Lok Sabha seats where the party is weak for the upcoming general elections.