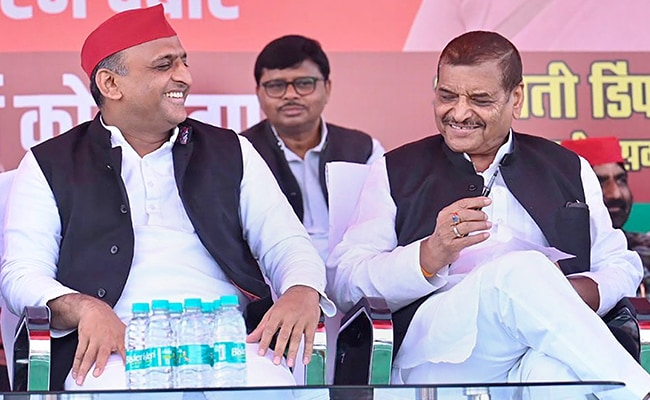 After reconciliation with nephew Akhilesh Yadav, the tone of senior Samajwadi Party leader Shivpal Singh has now changed. Founder of Progressive Samajwadi Party Lohia and Samajwadi Party MLA Shivpal Singh Yadav said on Wednesday that he has accepted nephew Akhilesh Yadav as his leader and SP is his party. When asked by journalists that he has not got any post in SP yet, Shivpal Yadav said, ‘Akhilesh Yadav is my nephew and SP president. I have accepted him as my leader. Like him, I am also an SP MLA. SP is my party and I have held the first positions as well. Expressing the resolve to overthrow the BJP government, SP leader Shivpal Singh Yadav said that the people of the party will go on the path of struggle and it is certain that now Lanka will burn.

On the question of forming a front of opposition parties in Uttar Pradesh in the Lok Sabha elections 2024, he said that the SP alone is capable of removing the BJP from Uttar Pradesh. SP leader and MLA Yadav, while talking to reporters at Fafna in the district on Wednesday night, termed SP as a follower of Lord Ram and Krishna. He said, “We are the people who believe in Lord Ram and Krishna and follow their thoughts. The people of SP will come out on the path of struggle and it is certain that Lanka will burn. Yadav said that his aim is to remove the BJP from power in the general elections to be held in 2024 and Akhilesh Yadav in the assembly elections to be held in Uttar Pradesh in 2027. To become the Chief Minister.

On Aparna Yadav joining the SP, he said that she is the daughter-in-law of the family and always participates in the family’s happiness and sorrow. Yadav said on the speculation of Varun Gandhi joining the SP that whoever wants to come to remove the corrupt BJP government is welcome. Regarding the non-participation of the Congress in ‘Bharat Jodo Yatra’ and Akhilesh Yadav’s participation in the rally of opposition parties organized by Telangana Chief Minister K Chandrasekhar Rao, whether the SP does not like Rahul Gandhi? On this Yadav said, “Best wishes to Rahul Gandhi. He has a separate party. The leadership of the party will decide on joining the Srinagar rally of the Congress.

Will those who get hurt on every talk take a lesson after the PM’s statement?